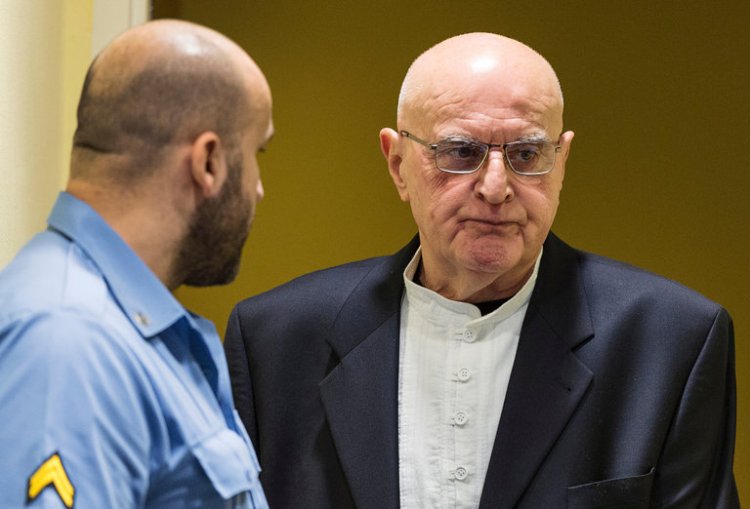 The Bosnian war criminal Ljubisa Beara has died in prison, convicted of helping direct the slaughter of about 8000 Muslim men and boys in Srebenica in 1995, the worst genocide in Europe since the Nazis. He was indicted by the International War Crimes Tribunal in 2002, then allegedly sheltered by the Bosnian government for two years before finally turning himself in. An army colonel, he was convicted of personally supervising the beheading of up to 100 Muslims over a five-day killing frenzy, directing the digging of mass graves and flooding the area with spotlights so the killing could go on all night. (Michael Kooren/pool photo, 2005)

Grace to you and peace from God our Father and from the Lord Jesus Christ. Philippians 1:2

O God, make speed to save us.
O Lord, make haste to help us.

Glory to the Father, and to the Son, and to the Holy Spirit:
as it was in the beginning, is now, and will be for ever. Amen. Alleluia.

O gracious Light,
pure brightness of the everliving Father in heaven,
O Jesus Christ, holy and blessed!
Now as we come to the setting of the sun,
and our eyes behold the vesper light,
we sing your praises, O God: Father, Son and Holy Spirit.
You are worthy at all times to be praised by happy voices,
O Son of God, O Giver of life,
and to be glorified through all the worlds.

19  You spoke once in a vision and said to your faithful people: *
“I have set the crown upon a warrior
and have exalted one chosen out of the people.
20  I have found David my servant; *
with my holy oil have I anointed him.
21  My hand will hold him fast *
and my arm will make him strong.
22  No enemy shall deceive him, *
nor any wicked man bring him down.
23  I will crush his foes before him *
and strike down those who hate him.
24  My faithfulness and love shall be with him, *
and he shall be victorious through my Name.
25  I shall make his dominion extend *
from the Great Sea to the River.
26  He will say to me, ‘You are my Father, *
my God, and the rock of my salvation.’
27  I will make him my firstborn *
and higher than the rulers of the earth.
28  I will keep my love for him for ever, *
and my covenant will stand firm for him.
29  I will establish his line for ever *
and his throne as the days of heaven.”
30  If his children forsake my law *
and do not walk according to my judgments;
31  If they break my statutes *
and do not keep my commandments;
32  I will punish their transgressions with a rod *
and their iniquities with the lash;
33  But I will not take my love from him, *
nor let my faithfulness prove false.
34  I will not break my covenant, *
nor change what has gone out of my lips.
35  Once for all I have sworn by my holiness: *
‘I will not lie to David.
36  His line shall endure for ever *
and his throne as the sun before me;
37  It shall stand fast for evermore like the moon, *
the abiding witness in the sky.'”
38  But you have cast off and rejected your anointed; *
you have become enraged at him.
39  You have broken your covenant with your servant, *
defiled his crown, and hurled it to the ground.
40  You have breached all his walls *
and laid his strongholds in ruins.
41  All who pass by despoil him; *
he has become the scorn of his neighbors.
42  You have exalted the right hand of his foes *
and made all his enemies rejoice.
43  You have turned back the edge of his sword *
and have not sustained him in battle.
44  You have put an end to his splendor *
and cast his throne to the ground.
45  You have cut short the days of his youth *
and have covered him with shame.
46  How long will you hide yourself, O LORD?
will you hide yourself for ever? *
how long will your anger burn like fire?
47  Remember, LORD, how short life is, *
how frail you have made all flesh.
48  Who can live and not see death? *
who can escape from the power of the grave?
49  Where, Lord, are your loving-kindnesses of old, *
which you promised David in your faithfulness?
50  Remember, Lord, how your servant is mocked, *
how I carry in my bosom the taunts of many peoples,
51  The taunts your enemies have hurled, O LORD, *
which they hurled at the heels of your anointed. 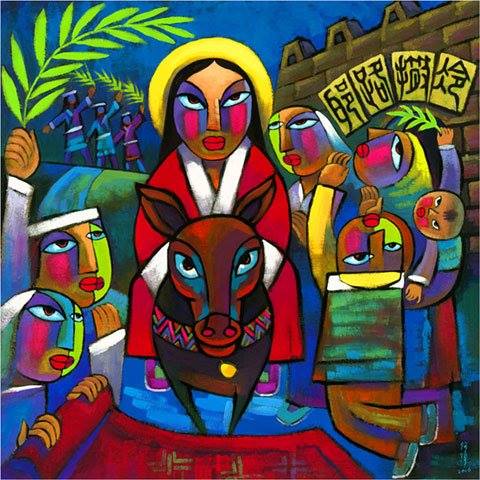 He Qi: Entry into Jerusalem

When they were approaching Jerusalem, at Bethphage and Bethany, near the Mount of Olives, Jesus sent two of his disciples and said to them, “Go into the village ahead of you, and immediately as you enter it, you will find tied there a colt that has never been ridden; untie it and bring it. If anyone says to you, ‘Why are you doing this?’ just say this, ‘The Lord needs it and will send it back here immediately.'” They went away and found a colt tied near a door, outside in the street. As they were untying it, some of the bystanders said to them, “What are you doing, untying the colt?” They told them what Jesus had said; and they allowed them to take it. Then they brought the colt to Jesus and threw their cloaks on it; and he sat on it. Many people spread their cloaks on the road, and others spread leafy branches that they had cut in the fields. Then those who went ahead and those who followed were shouting,

Then he entered Jerusalem and went into the temple; and when he had looked around at everything, as it was already late, he went out to Bethany with the twelve.

Lord, you now have set your servant free *
to go in peace as you have promised;
For these eyes of mine have seen the Savior, *
whom you have prepared for all the world to see:
A Light to enlighten the nations, *
and the glory of your people Israel.

Absalom Jones never had an easy time of it. The Methodists he broke away from eventually donated land on which Jones could build his new church, but then repossessed it and charged them money to get their building back. Negotiations with Episcopal Bishop White were also fraught; White held the power to admit them to his diocese, but the St. Thomas congregation demanded that Mr. Jones be licensed as a layreader and eventually ordained so they could exert their own leadership. He spent seven years as a deacon before White finally made him a priest; the normal wait is six months to a year. (Delaware Art Museum)

I believe in God, the Father almighty,
creator of heaven and earth.
I believe in Jesus Christ, God’s only son, our Lord,
who was conceived by the power of the Holy Spirit,
born of the Virgin Mary,
suffered under Pontius Pilate,
was crucified, died, and was buried;
he descended to the dead.
On the third day he rose again;
he ascended into heaven,
he is seated at the right hand of the Father,
and he will come again to judge the living and the dead.
I believe in the Holy Spirit,
the holy catholic Church,
the communion of saints,
the forgiveness of sins,
the resurrection of the body,
and the life everlasting. Amen.

Our Father in heaven, hallowed be your Name,
your kingdom come, your will be done, on earth as in heaven.
Give us today our daily bread.
Forgive us our sins, as we forgive those who sin against us.
Save us from the time of trial, and deliver us from evil.
For the kingdom, the power, and the glory are yours, now and for ever. Amen.

Members of St. Thomas African Episcopal Church, founded by Absalom Jones, at the 2005 dedication of a historical marker remembering him in Philadelphia. (Episcopal Church Archives)

Set us free, heavenly Father, from every bond of prejudice and fear; that, honoring the steadfast courage of your servant Absalom Jones, we may show forth in our lives the reconciling love and true freedom of the children of God, which you have given us in your Son our Saviour Jesus Christ, who lives and reigns with you and the Holy Spirit, one God, now and for ever. Amen.

A Collect for Peace

Most holy God, the source of all good desires, all right judgments, and all just works: Give to us, your servants, that peace which the world cannot give, so that our minds may be fixed on the doing of your will, and that we, being delivered from the fear of all enemies, may live in peace and quietness; through the mercies of Christ Jesus our Savior. Amen.

Ordination of Maria, Leslie, Teresa & Alissa
Our mission partners in Haiti, Liberia, Brazil and on the Rosebud Reservation
Those who give to food banks and pantries, and all who receive
Community Health Centers and Free Clinics

A Collect for Mission

O God and Father of all, whom the whole heavens adore: Let the whole earth also worship you, all nations obey you, all tongues confess and bless you, and men and women everywhere love you and serve you in peace; through Jesus Christ our Lord. Amen.

Let us bless the Lord.
Thanks be to God.

The grace of our Lord Jesus Christ, and the love of God, and the fellowship of the Holy Spirit, be with us all evermore. Amen. 2 Corinthians 13:14++