“Here are my mother and my brothers! Whoever does the will of God is my brother and sister and mother.” 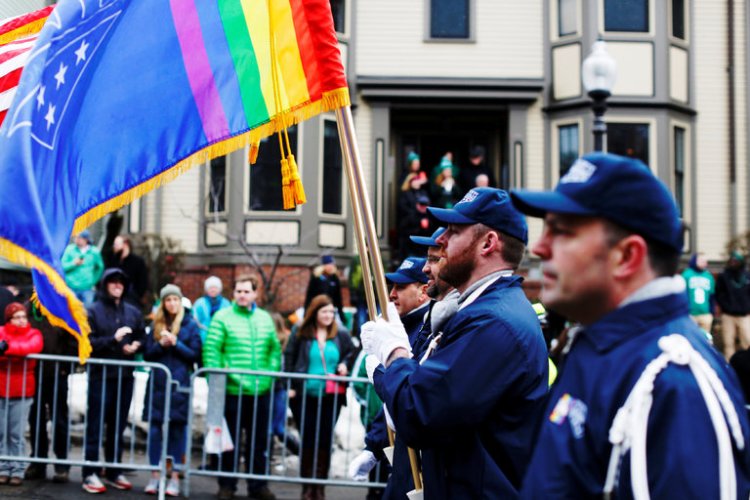 The South Boston, Massachusetts St. Patrick’s Day Parade tried banning Gay people again last week, voting 9-4 to bar a group of military veterans called OutVets for displaying a rainbox flag as part of their logo – which has been allowed for the past two years. This time the governor refused to march, the mayor said he’d skip it, and all of a sudden the sponsors voted 9-0 to allow OutVets back in. Defending their country apparently wasn’t good enough for the old men of South Boston. Above: marching in 2015. (Dominic Reuter/Reuters)

Jesus said, “If anyone would come after me, let them deny themselves and take up their cross and follow me.” Mark 8:34

O God, make speed to save us.
O Lord, make haste to help us.

Glory to the Father, and to the Son, and to the Holy Spirit:
as it was in the beginning, is now, and will be for ever. Amen.

Light of the world in grace and beauty,
Mirror of God’s eternal face,
Transparent flame of love’s free duty,
You bring salvation to our race.
Now, as we see the lights of evening,
We raise our voice in hymns of praise;
Worthy are you of endless blessing,
Sun of our night, lamp of our days.

1  How dear to me is your dwelling, O LORD of hosts! *
My soul has a desire and longing for the courts of the LORD;
my heart and my flesh rejoice in the living God.
2  The sparrow has found her a house
and the swallow a nest where she may lay her young; *
by the side of your altars, O LORD of hosts,
my Sovereign and my God.
3  Happy are they who dwell in your house! *
they will always be praising you.
4  Happy are the people whose strength is in you! *
whose hearts are set on the pilgrims’ way.
5  Those who go through the desolate valley will find it a place of springs, *
for the early rains have covered it with pools of water.
6  They will climb from height to height, *
and the God of gods will reveal himself in Zion.
7  LORD God of hosts, hear my prayer; *
hearken, O God of Jacob.
8  Behold our defender, O God; *
and look upon the face of your Anointed.
9  For one day in your courts is better than a thousand in my own room, *
and to stand at the threshold of the house of my God
than to dwell in the tents of the wicked.
10  For the LORD God is both sun and shield; *
the LORD will give grace and glory;
11  No good thing will the LORD withhold *
from those who walk with integrity.
12  O LORD of hosts, *
happy are they who put their trust in you! 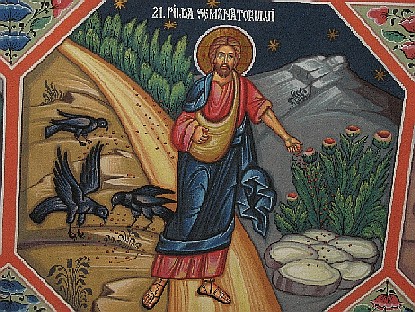 Parable of the Sower (iconographer unknown)

Again he began to teach beside the sea. Such a very large crowd gathered around him that he got into a boat on the sea and sat there, while the whole crowd was beside the sea on the land. He began to teach them many things in parables, and in his teaching he said to them: “Listen! A sower went out to sow. And as he sowed, some seed fell on the path, and the birds came and ate it up. Other seed fell on rocky ground, where it did not have much soil, and it sprang up quickly, since it had no depth of soil. And when the sun rose, it was scorched; and since it had no root, it withered away. Other seed fell among thorns, and the thorns grew up and choked it, and it yielded no grain. Other seed fell into good soil and brought forth grain, growing up and increasing and yielding thirty and sixty and a hundredfold.” And he said, “Let anyone with ears to hear listen!”

Lord, you now have set your servant free *
to go in peace as you have promised;
For these eyes of mine have seen the Savior, *
whom you have prepared for all the world to see:
A Light to enlighten the nations, *
and the glory of your people Israel.

I believe in God, the Father almighty,
creator of heaven and earth.
I believe in Jesus Christ, God’s only son, our Lord,
who was conceived by the power of the Holy Spirit,
born of the Virgin Mary,
suffered under Pontius Pilate,
was crucified, died, and was buried;
he descended to the dead.
On the third day he rose again;
he ascended into heaven,
he is seated at the right hand of the Father,
and he will come again to judge the living and the dead.
I believe in the Holy Spirit,
the holy catholic Church,
the communion of saints,
the forgiveness of sins,
the resurrection of the body,
and the life everlasting. Amen.

Our Father in heaven,
hallowed be your Name,
your kingdom come, your will be done
on earth as it is in heaven.
Give us today our daily bread.
Forgive us our sins, as we forgive those who sin against us.
Save us from the time of trial
and deliver us from evil.
For the kingdom, the power and the glory are yours,
now and for ever. Amen.

Show us your mercy, O Lord;
And grant us your salvation.
Clothe your ministers with righteousness;
Let your people sing with joy.
Give peace, O Lord, in all the world;
For only in you can we live in safety.
Lord, keep this nation under your care;
And guide us in the way of justice and truth.
Let your way be known upon earth;
Your saving health among all nations.
Let not the needy, O Lord, be forgotten;
Nor the hope of the poor be taken away.
Create in us clean hearts, O God;
And sustain us with your Holy Spirit. 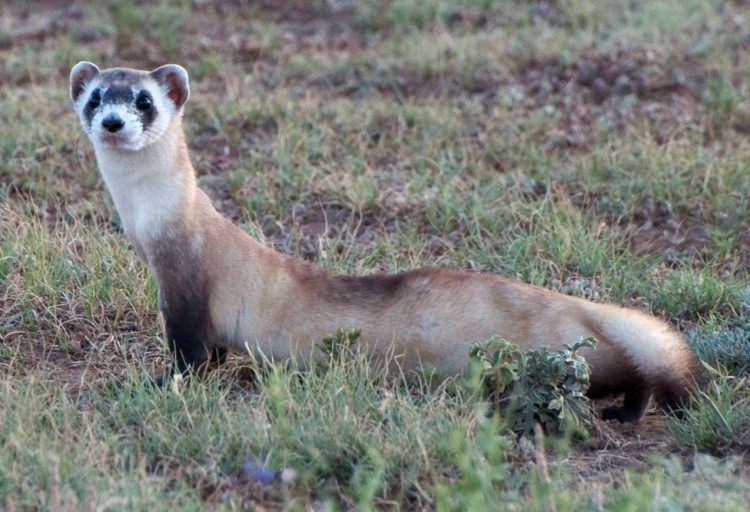 The U.S. Endagered Species Act of 1973 is considered the gold standard of species protection laws, and is responsible for the survival of many creatures, including the black-footed ferret at Vermejo Park Ranch in New Mexico. But business and development interests have always wanted to get rid of it, and now with a new administration in Washington, renewed efforts are being made to weaken or repeal it. (Kimberly Fraser, U.S. Fish and Wildlife Service)

Collect of the Day: Second Sunday in Lent

O God, whose glory it is always to have mercy: Be gracious to all who have gone astray from your ways, and bring them again with penitent hearts and steadfast faith to embrace and hold fast the unchangeable truth of your Word, Jesus Christ your Son; who with you and the Holy Spirit lives and reigns, one God, for ever and ever. Amen.

A Collect for Sundays

Lord God, whose Son our Savior Jesus Christ triumphed over the powers of death and prepared for us our place in the new Jerusalem: Grant that we, who have this day given thanks for his resurrection, may praise you in that City of which he is the light, and where he lives and reigns for ever and ever. Amen.

A Collect for Mission

O God and Father of all, whom the whole heavens adore: Let the whole earth also worship you, all nations obey you, all tongues confess and bless you, and men and women everywhere love you and serve you in peace; through Jesus Christ our Lord.

A Prayer of St. Chrysostom

Almighty God, you have given us grace at this time with one accord to make our common supplications to you; and you have promised through your well-beloved Son that when two or three are gathered together in his Name you will be in the midst of them: Fulfil now, O Lord, our desires and petitions as may be best for us; granting us in this world knowledge of your truth, and in the age to come life everlasting. Amen.

Let us bless the Lord.
Thanks be to God.

Glory to God whose power, working in us, can do infinitely more than we can ask or imagine: Glory to God from generation to generation in the Church, and in Christ Jesus for ever and ever. Amen. Ephesians 3:20-21++